Exactly one year ago, Dolfans still had high hopes that the 2010 season would be able to quickly turn around, that Tyler Thigpen was going to be able to lead a miraculous surge into the playoffs, and that mediocrity was at its imminent death. However, after the Dolphins beat the Titans on the 14th of November, what Dolfans didn't realize was that the win against Tennessee was going to be the last home win in a long time.

However all streaks, good or bad, must come to an end sooner or later, and on Sunday afternoon the Dolphins looked to finally break the Sun Life curse and win one for the city of Miami. After leading and dominating seemingly throughout the whole game, somehow the Dolphins were still only up by 4 points, and we've all heard the "4th quarter story" before. However, after carefully driving the ball down the field, Brian Daboll called a play that was finally able to seal a home win for Miami and end the dreaded "Sun Life Curse." Let's take a look at reggie Bush's 18-yard TD run to seal the W. 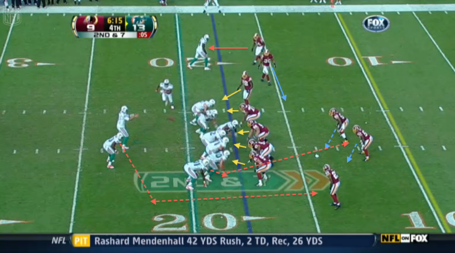 The Dolphins come out in a typical shotgun set with Brandon Marshall lined up to the far left, Reggie Bush in the slot, and Daniel Thomas right next to Matt Moore. However, instead of bringing in the other Wide Receiver, the Fins go ahead and line up an extra TE (Charles Clay) alongside Anthony Fasano to help out with the run.

On the play, Brandon Marshall will simply distract Byron Westbrook from getting near the action, Reggie Bush is going to go in motion after Matt Moore’s signal and take the ball down the right sideline, Daniel Thomas will eye down and attempt to block DeAngelo Hall, who sniffs out the draw from first glance, and finally Charles Clay will try to lay a block on London Fletcher to setup the hole.

Now on the defensive front, the Redskins are lined up in a 4-3 over defense, but instead of having two safeties playing deep, Washington has LaRon Landry playing shallow zone a few yards in front of Reggie Bush. Along with Landry, linebackers Perry Riley (#56) and London Fletcher (#59) will be playing shallow zone as well, eyeing down the run along the way. The Skins will be bringing pressure to the weak side having the big Brian Orakpo blitzing. Luckily the Dolphins ran the ball to the right, or the play might have resulted in a solid gain of "ZERO." And so the play begins.

***NOTE: The only O-Linemen who are going to stay at the line and block are Richie Incognito, Jake Long, Vernon Carey, Anthony Fasano (4 against 5), while the rest (Charles Clay, Marc Colombo, and Mike Pouncey) try to go down the field to set up some breathing room for the speedy back. 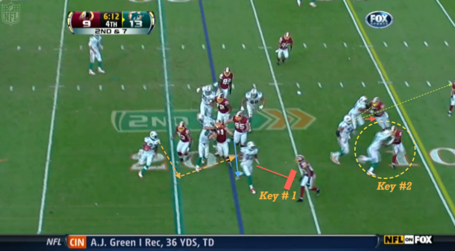 As mentioned before, the "4 against 5" wasn’t going to be an easy task. All four linemen left behind had to somehow keep the five rushers from getting to the right side to stop the run, but they were able to do it in an extraordinary fashion. Fortunately, because the run was to the right side of the field, the worry of Brian Orakpo was all but faded as each O-Linemen now had to only focus on one man: Jake Long vs. Stephen Bowen, Richie Incognito vs. Chris Neild, Vernon Carey vs. Kentwan Balmer, and Anthony Fasano vs. Ryan Kerrigan.

Long made a solid push on Bowen leaving him jumbled in between linemen. Vernon Carey was also able to get a strong push Kentwan Balmer, getting him away from Reggie. However, none of these two blocks on the line compare to how Fasano was able to hold off Ryan Kerrigan. Notice how Fasano is able to fight Kerrigan just enough to help Bush sneak in past the line.

Not all linemen made good blocks however. Richie Incognito wasn’t able to get enough on Chris Neild to keep him away from getting into Reggie’s way…more from that later though.

Now what do those two keys represent? Well, in order for Reggie to have any hole to go through on the run, the Dolphins had to take out two of the Redskins most valuable defensive players, London Fletcher and DeAngelo Hall, and they executed that plan perfectly. The first key comes from Daniel Thomas who quickly maneuvers himself to the right sideline and checks DeAngelo Hall just enough for a gap to be opened.

On the second key we have Charles Clay launching himself off the line and blasting through the chest of Fletcher hard enough to move him all the way back to the endzone. Charles has truly transformed himself into being an extremely versatile blocker/Full Back/TE by making big catches week after week and making blocks that you usually only see veterans making.

Finally, to the left of Clay, Marc Colombo is looking to see whether or not he should try to block the deep safety, Reed Doughty, or help out Mike Pouncey with his block on Perry Riley. Fortunately, he makes the right move and ends up being the final key to adding 6 to board, but once again, more from that later. 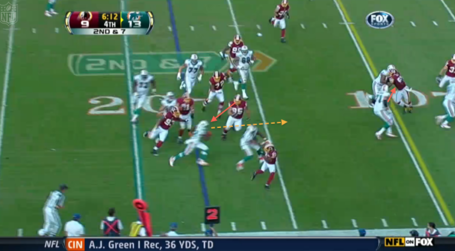 Now that Reggie turns the corner and heads for the pile-on, he has to burst out fast enough to get away from Chris Neild (#95), who not to mention is a good 2 yards ahead of Bush and seems to have the advantage on the play. However, Reggie’s speed is no match for Neild as he is left smelling the back of Bush’s shoes as he bursts through the hole.

**NOTE: Two quick things to notice before the next frame:

2. Notice how Colombo decided to help out Pouncey on his block instead of trying to go out of his way to get to the safety that was about 7 yards ahead of him. This proves to be a very decisive moment on the run, which ends up having the Miami sideline in uproar. 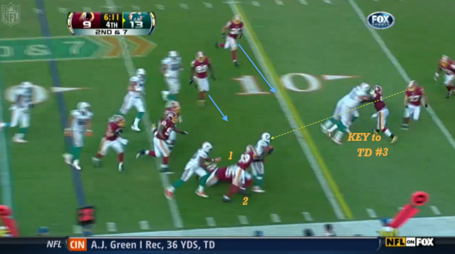 Once again Reggie Bush shows his ability to break tackles on the run by getting away from Crhis Neild and DeAngelo Hall, who managed to break away from Daniel Thomas. For three consecutive weeks Reggie has proven to be the elite, speedy, break-away player that Dolfans expected him to be at the start of the season, hopefully he keeps it up for the rest of the season.

Now on to the 3rd and final key. After Bush gets away from both defenders, he is now given enough room to get inside the "10," maybe even the "5," but does he have enough room to actually score? Because Orakpo and Landry are creeping in closer and closer to the right sideline, Bush only has a limited space to run in, and that limited space still has two defenders present. However, somehow, from the miracles above, Marc Colombo is able to make a spectacular play down the field. Instead of just helping out Pouncey with his block, he decides to use that 6"10 320 lb. body to completely push Perry Riley into Reed Doughty opening a massive second hole for Bush to run through. 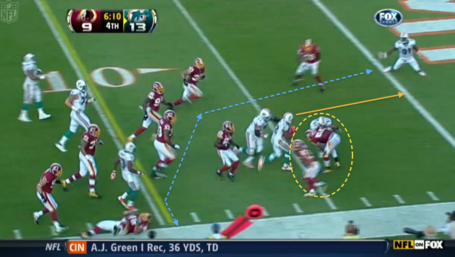 After Colombo makes the tremendous play, Doughty trips on top of Riley, making him stumble and giving Reggie the final 6 yards to dance inside the endzone. For the first time in weeks of frustrating "4-mintue drills" the Dolphins were finally able to capitalize on good field position to finish the game.

So, are the Dolphins actually trying to make a run at this thing? Is it even possible? You never know; Miami takes on a Buffalo Bills team next week that was embarrassed by a hot n’ cold Cowboys team by a ridiculous margin, and now the Fins seem to believe that they have the most momentum in the league. I have not seen stranger, more impossible things in my life, but this could be interesting.

VIDEO: Today I'm going to post two videos. The first video will consist of the touchdown that I just analyzed above in order to give you all the final product of a very well-designed play. The second video will be of Reggie's touchdown run against the Kansas City Chiefs last week, and I want you all to notice the playcall and the outcome. Notice anything?