The story of the Dolphins season goes as follows: Give hope in the 1st and 2nd quarter, slowly diminish the role of playmaking in the 3rd quarter, and find the most creative way to lose in the 4th quarter. This has now been the trend for 10 games now and signs of improvement are dim.

On Halloween eve the Dolphins sought to get there first win of the season and shock the New York Giants at home. All was going well until they hit halftime. The Dolphins were able to turn back into their normal selves and blow yet another lead, and unfortunately, another game.

Not all was lost however. Reggie Bush had a career day rushing for over 100 yards, including a 35-yard run, which set up a Matt Moore bootleg touchdown. Let’s take a quick look at Reggie’s explosive run. 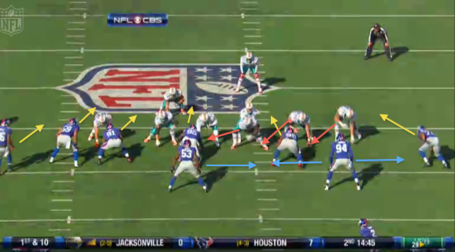 Miami comes out in an I Formation, fullback offset strongside, with Reggie Bush lined up as the prime running back. Davone Bess will go in motion in order to check Antre Rolle from blitzing the right side and Brandon Marshall will block Corey Webster from getting involved as well.

The key to this whole play succeeding lies on the Fullback and the O-Line. On the right side, Anthony Fasano will try to push Michael Boley away from the play, forcing him to not get involved. Surprisingly, Marc Colombo will do the same thing with Justin Tuck, getting him as far from the run as possible by pushing him far behind the line of scrimmage

Now it gets interesting. Instead of eyeing down Mathias Kiwanuka (#94) or Greg Jones (#53), Vernon Carey will move quickly off the snap to the left side in order to stop Osi Umenyora from getting to the backfield immediately when the play begins. Because Carey moves to the left side, both Jake Long and Nate Garner will push to the right in order to give Reggie some space down the C Gap. And so the play begins. 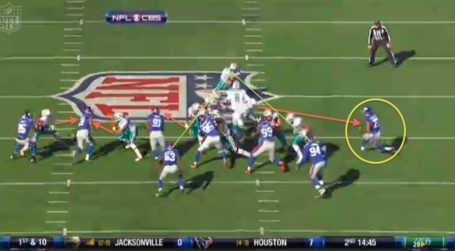 After Davone Bess is able to check Antre Rolle from getting inside, he quickly helps Anthony Fasano in pushing Michael Boley from getting anywhere as well. Marc Colombo is a little late in noticing Justing Tuck, however he is able to turn his back in time to block him. If you’d ask me who would win in a foot race between Vernon Carey and Osi Umenyora, the obvious answer would be Osi, but in this case, Vernon Carey quickly notices Osi and runs towards him right off the nap.

The biggest obstacles on this play are Mathias Kiwanuka and and Greg Jones who eye down Reggie Bush throughout the play. These two players know where Reggie is going and seem to have the advantage on the run. Unfortunately for them, Miami has two extremely talented blockers in Jake Long and Lex Hilliard who are able to make this run happen. 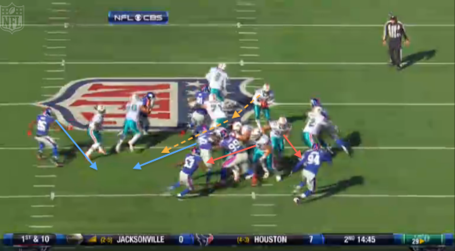 Before we take a look at the blocking, let’s take a look at what’s going through the mind of Reggie Bush. We all know Reggie is the kind of guy that likes to juke and make cut moves in open space, and on this run it seems as if Reggie will be able to make a cut to the right and be home free (Shown by the dotted line). However, his rapid football instincts kick in and he notices that if he makes a cut, there’s a chance that Antre Rolle or Rocky Bernard (#95) will get off their block and stop him for a short gain. So, Reggie decides to take the smart way out and run behind his two lead blockers: Jake Long and Lex Hilliard. Now let’s take a look at these extraordinary blocks. 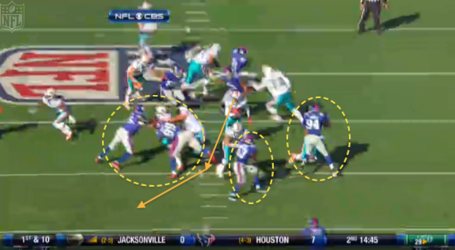 As you can see, there are three main blocks that help give this run some momentum. First we have Mike Pouncey and Nate Garner seemingly destroying Chris Canty and Rocky Bernard, pushing them far to the left so Reggie could get a bit of breathing room. Now we notice the two most important blocks on the play. To the right, Lex Hilliard is able to push Mathias Kiwanuka away from the play, ending the "advantage" he once had.

Next to Hilliard is Jake Long, who not only pushes Greg Jones away, but he gets him 10 yards back from Reggie Bush after being just a few feet from him one second ago. You really have to admire what Long did on this play because although you can’t see it from the frame, Long was able to get off his block from Chris Canty (Notice why he is tiled) and then go and block Greg Jones in an instant, as if it was a piece of cake. That is why he is considered one of the best O-Linemen in the league. 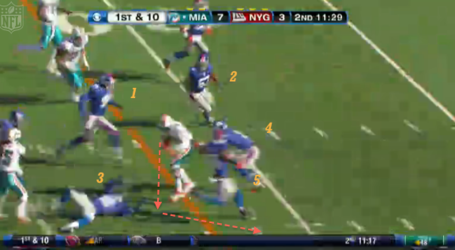 After picking up a nice 10-yard gain on the play, RG Bush decides to take it a step further and show Dolfans why he was brought in. Reggie makes a quick cut up the middle and then spins out not 1, not 2, not 3, not 4, but 5 different defenders, one of which falls down. This allows Reggie to burst to the outside and with his breakaway speed, try to make a run at 6. 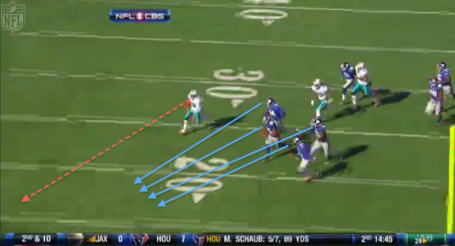 Reggie looks to get into the endzone and races towards the pile on, however he is dropped just a few yards short from the touchdown. Fortunately, Bush was able to get Antre Rolle a little mad from the spin move, who lets his frustration out on a 15-yard horse collar penalty, which later set up a naked bootleg touchdown from Matt Moore.

Although the Dolphins gave up another lead for a loss, they keep showing us as the season progresses that there is some talent on this team, it’s just a matter of how it's used, and unfortunately, it seems as if Sparano cannot use that talent.