Share All sharing options for: A Phinsider Play Breakdown: Anthony Fasano's Touchdown against the Denver Broncos

Throughout the season, it appears as if the Miami Dolphins have been allergic to the Red Zone, scoring on only 33% of their drives inside the twenty. Unfortunately, the few times the Dolphins have scored this season have come off the right foot of Dan Carpenter.

On Sunday, Miami looked to finally break that Red Zone touchdown curse as they drove the ball 72 yards down the field in the 3rd quarter and were able to capitalize on a beautifully designed play-action Touchdown pass to Anthony Fasano. Dolfans hadn’t seen this rarity in over 10 quarters of play and all of a sudden a sigh of relief drifted through their bodies. Everyone knows what happened at the end of the game, but let’s take a quick look at the anomaly that was the touchdown. 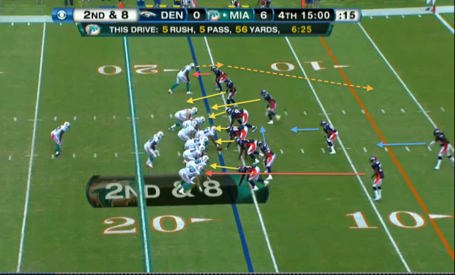 On this play, Miami comes out in an I Formation, fullback offset strongside. Instead of two receivers lined up on opposite sides, the Dolphins bring in an extra TE (Jeron Mastrud) to line up to the left of Anthony Fasano in order to bluff the run.  Fasano will do a short post out, Reggie Bush will come off the fake for a screen, and Brandon Marshall will make a 2-step "slant in."

As for the Broncos, they will line up in a 4-2-5 nickel defense with Von Miller and Brian Dawkins blitzing on the left side, Champ Bailey and Andre Goodman playing man, and Quinton Carter, Joe Mays, & D.J Williams all playing zone within the 12 and 5-yard line. 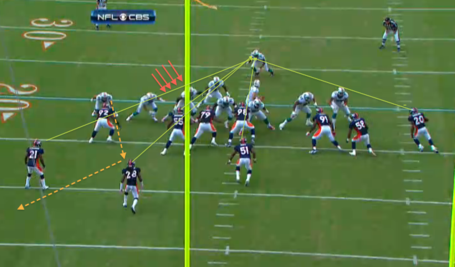 Right off the snap, Matt Moore quickly looks back at Reggie to fake the handoff. Because of the extra Tight End, all defenders are ready for the run and eye down Bush immediately. However, the only defenders that truly needed to be fooled with the run on this play were Andre Goodman and Quentin Carter because all O-Linemen (including Charles Clay and Jeron Mastrud) will be pushing off all middle defenders to the left, therefore giving room for either Reggie Bush or Anthony Fasano to get open.

Side Note: Brandon Marshall is quickly drawing Champ Bailey deep in the endzone making it easier for Matt Moore to make a pass in motion. 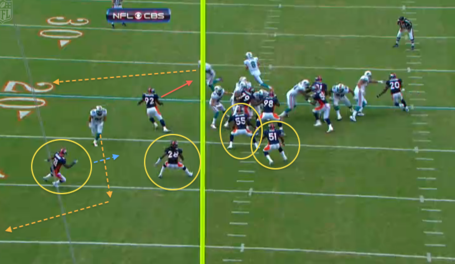 As you can see, all four circled defenders got faked out by the play-action and are seemingly stuck in one place while Reggie Bush and Anthony Fasano continue on their routes, easing there way into open space. The blockers up front give Moore good enough protection to be able to eye down both receivers running right without the threat of a sack or a turnover. 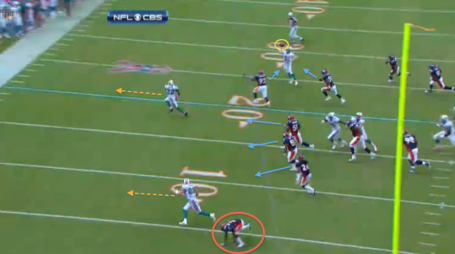 Now that Moore has some open space to eye down his receivers, he can finally make the decision on whom to throw it to. His first look was towards Reggie Bush who seemed to be wide open on the play and could have picked up about 10-15 yards. However, Moore quickly realized that Andre Goodman had slipped on the play leaving Fasano completely open for an easy pitch-and-catch. 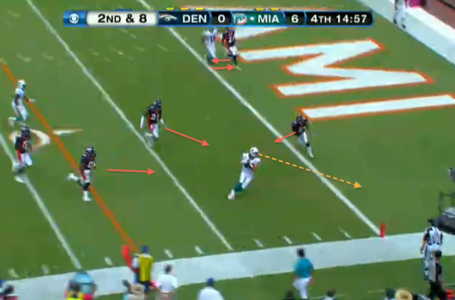 Matt Moore makes an excellent pass by throwing the ball into the only window where Fasano still has room to run and score. Because of the play-action and the Andre Goodman slip, “Number 80” is able to dive towards the pile on without any nearby pressure.

Although fans across the nation laughed in a depressed fashion once the game was over, this play itself was able give them a feeling of lost happiness, even if it was only temporary. This kind of Red Zone offense is what Miami has been been missing since 2009, however, the problem lies within the fact that it may be a little too late for it.