Broncos at Dolphins Tickets Available via The Phinsider and TiqIQ

Share All sharing options for: Broncos at Dolphins Tickets Available via The Phinsider and TiqIQ 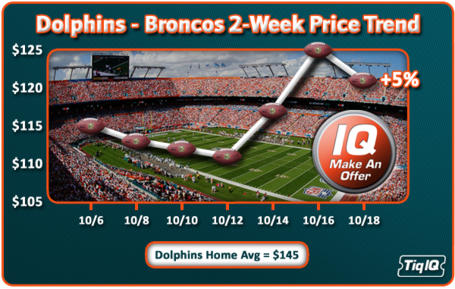 With the  Miami Dolphins still searching for their first win of the 2011 season, everything seems to be going downhill. However, despite a lame-duck coach and no franchise QB, "Luck" might be on their side.  Besides being in play for the consensus #1 pick in April's draft, TiqIQ is offering Dolphin fans another opportunity to save on tickets via their "Pick Your Price" feature.

Even though Miami has Matt Moore under center, the average ticket price for this Sunday's game vs Broncos is up 5% to $120.51.  Why is that? Well, with Tim Tebow coming to town as the Broncos starter, the Dolphins will be honoring the 2008 Florida Gators National Championship squad.

Want to get in cheap and beat the market? Make an offer of around $80 on 3-star seats (100's Endzone) that normally retail for near $140 for a savings of over 25%... and there are no service or shipping fees! But better act fast, because this deal is done at Noon on Friday.

For Broncos at Dolphins tickets, "Pick Your Price" today: http://tiqiq.us/4Nj

And don't forget, The Phinsider can cover all of your ticket needs.  Just head here: http://www.thephinsider.com/dolphins-tickets?BrandID=sbnationiframe&PublisherID=1011121&EventID=1413440221