So far, the Miami Dolphins season has been defined by the expression "One step forward and 10 steps back." Last night, Miami scored a quick field goal in the opening quarter. On the ensuing kickoff, Garrett McIntyre muffed and fumbled the football, which was recovered by Austin Spitler on the Jets 18-yard line.

Miami had to convert a long 3rd and 7, and it appeared as if a Dan Carpenter sighting was upon us. Unfortunately, Matt Moore threw a 100-yard TD pass…to Darrelle Revis, which turned out to be the turning point in last night’s game.

Let’s take a quick look on what happened on the Revis pick six. 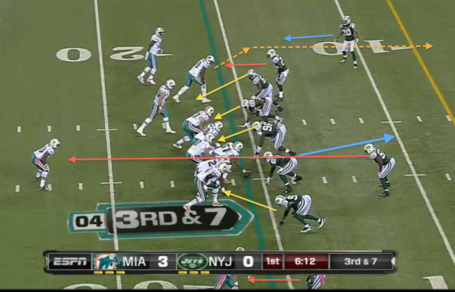 Miami comes out in an Ace formation with Charles Clay, Brandon Marshall and Anthony Fasano lined up to the left, and Brian Hartline lined up to the right. The Jets line up in a 46 defense with linebackers Jamaal Westerman and Bart Scott blitzing the left side, Marcus Dixon stepping back into coverage and David Harris spying Daniel Thomas. Cornerback Donald Strickland will play zone between the 8 and 15-yard line, Darrelle Revis will play man on Marshall, and Antonio Cromartie will also play man on Hartline. As for the Dolphins, Charles Clay will run a deep post pattern, Anthony Fasano will bounce off a tackler for a screen, Brandon Marshall will make a quick move to the left and streak 15 yards, Daniel Thomas will run a short drag and Brian Hartline will post out. And so the play begins. 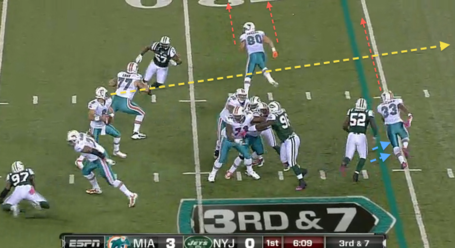 Right off the snap, Matt Moore immediately eyes down Brandon Marshall. Fortunately for Matt, the O-Line did a good job preventing any quarterback pressure at all, which gave him more time to throw the ball.

Near the line of scrimmage, Daniel Thomas quickly bounces off David Harris, and Anthony Fasano gets off his block to go for the screen. Although one may think that throwing the ball to either Fasano or Thomas might have picked up a first down, there were still defenders in that area, and so Moore makes the right move and throws it to his number one.

This image vividly shows that both Fasano and Thomas were being heavily covered by David Harris, Marcus Dixon and Donald Strickland, which means that either player would have been stopped short of the first down. However, with DT33’s ability to break tackles in open space, it might have not been a bad idea to throw it to him. 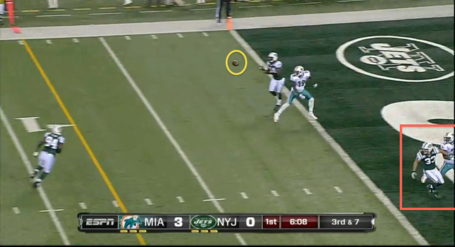 At first it seemed as if Marshall had slipped on the route, which allowed Darrelle Revis to make the interception without any trouble. However, from different views, Brandon  was clearly being pulled on the play, which made him stumble and gave Revis the "easy" pick. Obviously, the penalty was not called, and Revis ran it back to the house.

As for the two remaining receivers, to the right of the image it is visible that Charles Clay was extremely well covered by Eric Smith, and even farther out (not included) Brian Hartline was being protected by both Antonio Cromartie and Jim Leonhard.

So, at the end of it all, Matt Moore might have made the right decision throwing it to "The Monster." Unfortunately, due to a lack of accuracy and the lack of penalty, the play resulted in a unearned 100-yard touchdown, which signified the imminent end of the game.