Share All sharing options for: Anatomy of a Play: Goal Line Stand

Part two of this week's series will focus on the biggest defensive play of the game.  With the final whistle fast approaching, and Minnesota trailing by 4, their offense had finally awoken and had marched down to the Miami 1-yard line seemingly with ease.  It's in these situations where defensive coordinator Mike Nolan just puts 11 men in the box and lets his athletes make the play.  No stunting, no blitzing, no frills, no bells and whistles, just straight up power defensive football.  The Vikings offense did the same thing, running a no-nonsense straight-ahead hand-off.  It was a classic display of "who wants it more," where the better player doesn't always win, but the guy with more heart does.

Following Jason Allen's 2nd interception of Favre, Miami had the ball at their own 25, looking to rip off a long, clock-killing drive to finish the game off.  But on the first play, Ronnie fumbled, handing the ball back to the now-fired-up Vikings.  With the ball at Miami's 24, and 5:46 remaining, Minnesota looked poised to take the lead, especially when they drove right down to the one-yard line on 5 straight Adrian Peterson runs.  Miami's defense looked gassed, and they had just barely stopped Peterson on third down.  Everybody in the stadium knew what Minnesota was going to do on 4th and 1, and with 2:22 remaining on the clock, the game fell squarely on the shoulders of the Dolphins suddenly vulnerable defense. 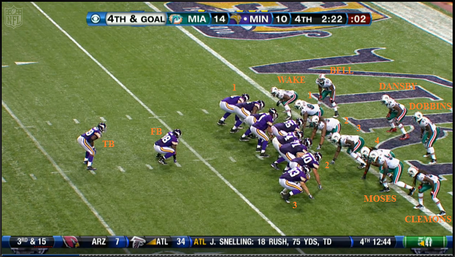 Minnesota lined up with 3 TE's, a FB, and Peterson 9 yards deep.  Miami countered with a 4-man line (1-Starks, 2-Soliai, 3-Langford, 4-McDaniel), and 4 LB's (2 of them on the line of scrimmage, essentially playing defensive end).  Chris Clemons lined up on the strong side, assigned with forcing any outside run back inside.  Bell was lined up on the weak side, prepared to pick up the TE in case Favre rolls out.  Dansby and Dobbins are 3 yards deep in the end zone, which allows them a good read and a running start at the line.  Davis is just off-screen to the right looking for a play action pass or sweep.  You can see that Miami wants to be aggressive, with 7 players on the line and leaning forward, and only 1 CB in the game. 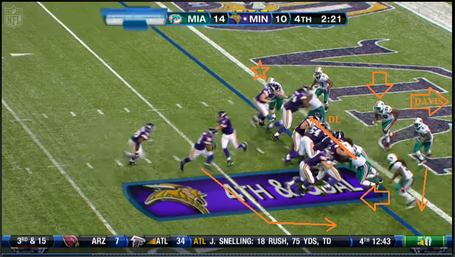 Right at the snap, Miami's defensive line holds their ground and begins to get a push into the backfield.  The Viking FB begins to angle to the outside, and Clemons and Dobbins both react to that and attack the sweep look.  Dansby reads the FB's path as well and heads into the cutback lane, his assignment as the weak side ILB.  Davis is still off-screen, staying home in case Favre keeps it.  Wake is on the backside of the play (noted by the star), and he does a great job of closing the cutback lane down, not giving Peterson much room once he breaks away from his lead blocker.

Now that we can see Minnesota's play beginning to develop, we can determine what it was they were actually trying to do.  The backside guard cut blocked Soliai, trying to cut off the pursuit for a cutback, but the play was designed to bounce outside to the right.  The hand-off and straight-ahead look was supposed to drag the defenders inside, allowing Peterson to sprint outside with his FB leading the way and turn the corner for the easy score. 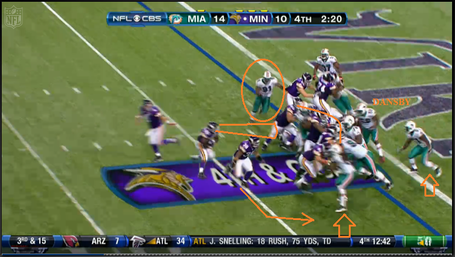 The defensive line really made this play happen for Miami.  You can see the penetration they get, forcing Peterson to make an early decision because he is unable to stretch the play out.  The FB is trying to turn the corner, but Clemons has gotten about 3 yards up-field, effectively cutting off the bounce-out by Peterson.  Dobbins did a good job of getting ahead of the play as well in case Peterson decided to turn it into a footrace to the pylon.  This is when Peterson decides to cut it up inside, and Wake's pursuit becomes a factor.  Because Wake is unblocked and in the backfield, Peterson is unable to cut all the way across the formation and walk into the endzone, so he has to lower his shoulder and try to power through.  Dansby, meanwhile, has sniffed out the inside gap and is already outside of the endzone and closing downhill. 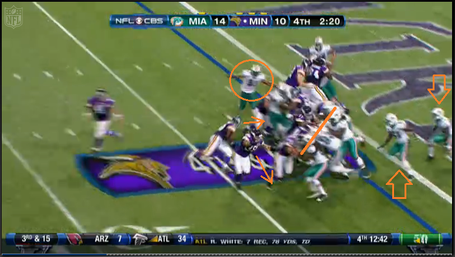 This is a great angle on the penetration by the Dolphins defense, as you can absolutely see how they cut off the outside path.  Minnesota's FB is working hard to get outside of the defense, but Peterson has already abandoned him and he's now full-force downhill towards the goal line.  I circled Wake once again to show you how he's cut off the left side and forced Peterson to run right down the middle.  Dansby is hidden by the DL, but he's already at the line of scrimmage and on a collision course with AP.  Vontae Davis is also in attack mode, seeing Peterson's cut inside and closing towards the hole to get involved.  His aggressiveness is what finishes this play off.  Dobbins has also read the cutback, and is trying to get himself back into the play. 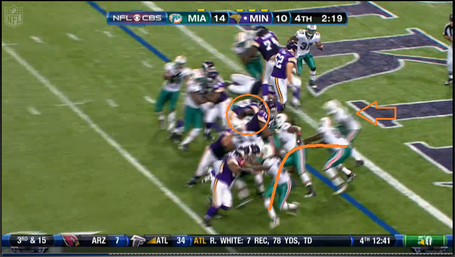 Peterson and Dansby have met, a yard behind the original line of scrimmage, and what might as well be a mile from the goal line.  The left side of Miami's defense (bottom of screen) got a great push and pretty much bottled Peterson up in the middle, where Dansby could make the hit.  Davis is now fully committed to the run and is flying in to get a piece of the running back. 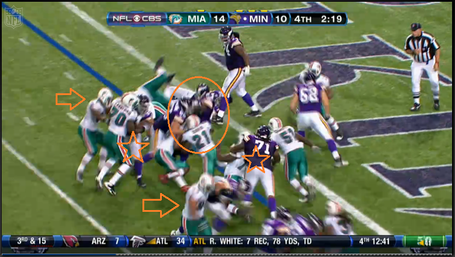 Dansby has Peterson wrapped up, and Davis comes in and delivers the final blow.  The arrows point out Wake and Moses, both 3-4 yards into the backfield, forcing Peterson to the inside, and the stars point out Langford and McDaniel, both of them upfield as well and keeping Peterson from having multiple cutback lanes.  Penetration kills goal line runs, and Miami got plenty of penetration on this play.  Peterson never got back to the line of scrimmage, and Miami withstood the Vikings ground assault and got the ball back with just over 2 minutes remaining. 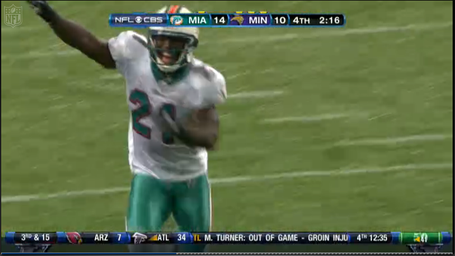 As it should be.  Davis celebrates the biggest defensive play of the year thus far, and he doesn't hurt himself at all with this one.

Following this play, Miami picked up a first down before the two minute warning, but handed the ball right back to Minnesota with 1:42 left.  This time however, they were able to punt it away instead of fumbling, and Minnesota started at their own 45, instead of deep in Miami territory.  With 55 yards separating the Vikings from the touchdown they needed, and only 1 timeout to work with, the drive eventually stalled at Miami's 27, and the Dolphins offense was able to kneel on the victory.  A victory thanks to a hard-nosed defense that played strong throughout the game (and even managed to score the decisive points).

**Note: Right-click the pictures and select "open in new window" to view them at full-size**