Anatomy of a Play: Hartline In For Six

Share All sharing options for: Anatomy of a Play: Hartline In For Six

In the first part of this week's installment of Anatomy of a Play, I'll take a look at the Dolphins' only offensive touchdown of the game, a 5-yard pass from QB Chad Henne to WR Brian Hartline.  We saw Miami open it up inside the 10 and go with an Empty set, giving the keys to Henne and letting him make the play for six.  I love the call here by Henning, because Minnesota is stout on the DL, but very weak in the secondary, so a power run play would've played right into their strength, while a pass attacked their biggest weakness.  Henning's ability to identify the weak link in the Vikings D and go after it inside the red zone is a huge reason why Miami was able to end this drive with a score.

The Dolphins are working on a 4-plus minute drive after a 4th and 2 failure by Minnesota.  This was Miami's first drive of the game, and they've worked 69 yards down the field to the Vikings 5, and now face 3rd and goal.  A touchdown here will silence the crowd, which is normally a huge advantage for the Vikings.  A failure on this play will not only get the crowd riled up, but the defense will go off the field feeling good and motivated.  Miami lined up in a 3 receiver set, with Marshall and Bess to the left, and Hartline split wide to the right.  Fasano was lined up at TE on the right side as well.  Ronnie Brown was lined up deep in the backfield, and motioned out to the slot on the right side... 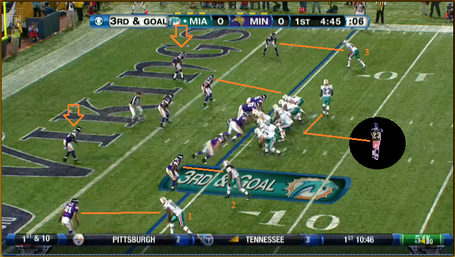 Pre-snap, you can see the Vikings in a 2-deep Man coverage, with DB's picking up Miami's 3 WR's, and a LB lined up to cover Fasano.  Ronnie Brown started deep behind Henne (spot-shadowed), and motioned outside Fasano.  What this does is force Minnesota to quickly change their coverage responsibilities, and that is what results in the confusion that leads to the score.  The Linebacker, Safety, and Corner all have to adjust on the fly, and the quick snap forces them to do so without communication. 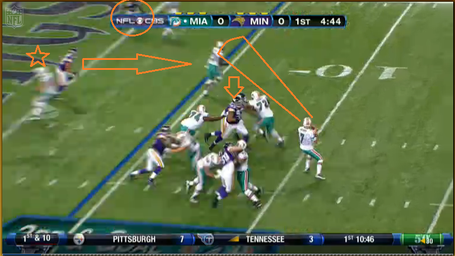 As the play develops, Henne is in immediate danger because RG John Jerry gets beat off the line and a defensive tackle is bearing down on Chad as he hits his final step.  Meanwhile, Fasano (noted by the star) is pushing up to the goal line, taking the attention of the safety who is just off-screen.  Brown heads straight into the flats, and Henne eyes him as the routes begin.  This is one instance where Henne was able to look off of his primary target and manipulate the coverage, as you can see with the LB and CB (circled, behind the score panel) both anticipate a quick throw to Ronnie and begin to close on him. 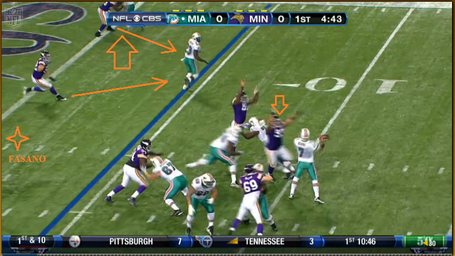 Henne is just about to release the ball, and not a moment too soon because he's got a guy right in his face.  The score panel is again in the way, but Hartline has slipped to the outside of the CB, who is still eyeballing Ronnie in the flats.  Because the LB committed to Brown as well, the safety is stuck inside covering Fasano, who sat down right at the goal line (4-point star, he's just off-screen).  As soon as the ball is released, the defense knew they were beat, because Hartline is running towards the back pylon, while the CB covering him is leaning forward towards Brown and hasn't even turned his hips to stay with Hartline. 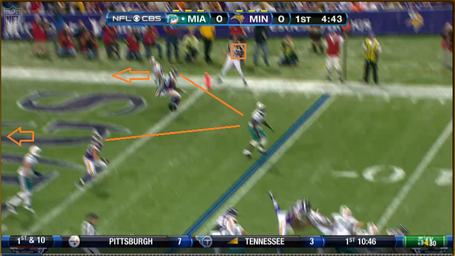 This is a great angle of the coverage breakdown, as it's clear as day that the CB is beat because he was worried about Brown.  The LB may not look like he's involved, but because he was drawn to the flats as well, the safety (arrow, just off-screen) had to stay inside locked on Fasano, giving Hartline a legitimate one-on-one match up to run his fade route.  The square shows the location of the ball in the air, already halfway there as Hartline begins to break beyond his man.  Great timing throw by Henne, especially under frontside pressure.  The location is perfect as well, as you'll see in the next frame. 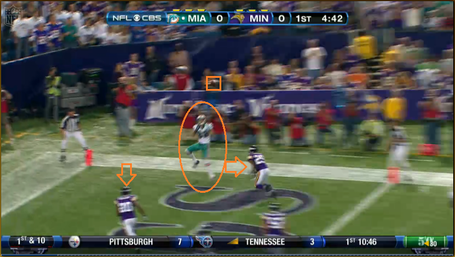 The safety finally comes into the picture at the bottom of the screen, but he is much too far away to have any chance of making a play.  The corner tries desperately to recover, but the timing and location of the throw make sure he has no chance either.  Hartline does a good job of elevating for the football and not waiting for the ball to come down, when the corner could have closed some ground by then and made a play.  Once again, I want to praise the location of the throw.  High, but with enough touch to make catching it inbounds academic, and deep enough in the endzone that no defensive player can get to it.  Textbook fade throw, and the RB motion and subsequent flats route helped Hartline get open, as opposed to having to win a jumpball like most Fade routes. 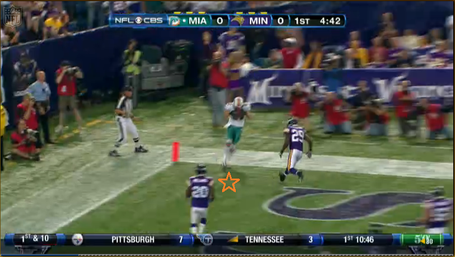 Tap-tap.  Both feet are in with ease, Hartline is never threatened, and Miami puts 6 on the board.  You can see, in this last frame, all three Vikings defenders that were involved in this play.  None of them are in position to stop the TD toss, which is a sign of a well-designed play.

Following this touchdown, both defenses held up for the rest of the half, and the Dolphins went into the locker room with a 7-0 lead.  While it wasn't a game-breaking play by any means, it was a perfect example of how you take advantage of your opponents weakness in the red zone.

**Note: Right-click the pictures and select "open in new window" to view them at full-size**