"Well, that's another nice mess you've gotten us into!" 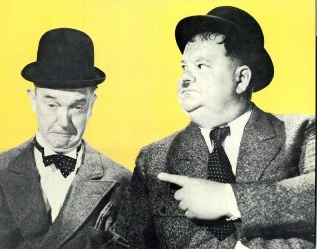 I don't know about you all, but this is pretty much how I picture Jeff Ireland and Tony Sparano right about now.

(Ireland is the one on the left)

You see, so far, a lot has...um (how shall we say...?) not gone according to the plan they had at the beginning of the season (I am just assuming that THIS wasn't their plan for the season, but what do I know, I'm just a fan).

Some of the "surprises" were bad luck, to be sure.  Injuries can limit a team.  Key injuries can cripple a team for a season.  Good teams build depth and try to ensure that they can work around most injuries, but even really good teams can have their seasons tanked by an injury to a key player, like the quarterback.

But some of the "surprises" should not really be that surprising, especially to the guys getting paid to plan for these things.

Injuries aside, we watched Sparano play "mix and match" with the O-line all through training camp - Right up until the first game!  Most coaches talk about the O-line as a cohesive unit that needs familiarity to be effective.  The men on the O-line need to learn how the guy next to him plays, and develop trust between the members.

So why take a unit that was very effective last season and blow it up?  Is it somewhat forseeable at the beginning of the season that maybe this might be a bad idea?  Just sayin....

Brandon Marshall temper tantrums....  you get the idea....

The point is that while the Dolphins have SOME things that can legitimately be called a "surprise" and "bad luck", there are SOME things that Ireland and Sparano should be held responsible for not managing very well.

I think the Chicago Bears game was the culmination of many of these things coming together in a "perfect storm" of disaster.  I would have to go back to the 2007 season, and Cam Cameron desperately throwing John Beck (quack) into the fire (roast duck), to come up with another game that was as painful to watch as the Bears game.

To be fair, Tyler Thigpen didn't play well, but the Chicago debacle can't be laid entirely his feet.

Despite the silly announcer for that game (cough.. cough... theisman.. cough..) who kept saying it was all about the lack of the Miami QB play, it is awfully hard to play well when you are 1) picking the ball up off the turf every other snap, 2) running for your life, and 3) have no running game to lean on.

In my humble opinion, it all came down to the Offensive Line, and lack of depth.

Miami was down to their third string QB, and that alone would make the O-line play all that much more important.  But, due to injury and lack of depth, the Miami Dolphins started with a backup Center (actually, you could go so far as to say he was their 3rd string Center, and Joe Berger is actually only backup material... but that would insinuate that they made a mistake getting rid of Jake Grove), and ended up with their starting Guard snapping the ball.  They have their best line player, Jake Long, playing with a major shoulder injury which limited his effectiveness, and then had to bring in backup backups at Guard and, for a time, at tackle.

Bottom line?  Take away Tyler Thigpen's scrambles and Miami ran the ball 7 times, for a total of 12 yards.  Peyton Manning would have had a hard time winning a game with a running game that weak, and Tyler Thigpen is no Peyton Manning.  Thigpen had no chance.

The guy is seriously starting to get on my nerves.  Okay, so I get that he is not happy right now, but there is no excuse for hurting your team's chances, two games in a row.

And now he has a hammy injury... fine, just great.  It sucks, but it happens.  But Mr. BM (a.k.a. Mr. Number Two) - seriously dude, when you get back on the field, try and keep the stupid off it - take your A.D.D. meds, smoke a blunt, meditate with Ricky, WHATEVER YOU NEED TO DO TO KEEP FROM ACTING LIKE A COMPLETE HORSES' ASS.  The 15 yds lost on a penalty might not win or lose a game, but it MIGHT torpedo the morale of your teammates - ESPECIALLY when they are already struggling.  Dumb, dumb, dumb.

So we get Henne back, and we hired some unemployed offensive linemen.  What can we expect this week?

We can expect the O-line to be weak.  We can expect that the running game will be non-existent unless the coaching staff wants to revive the Wildcat.  And we can expect Davone Bess to be double covered.

The Oakland Raiders are no pushover team this year.  And playing IN Oakland is never easy.  But the success of the Dolphins will be almost exclusively determined by their ability to run the ball.  If they can run it, they have a chance to win it.